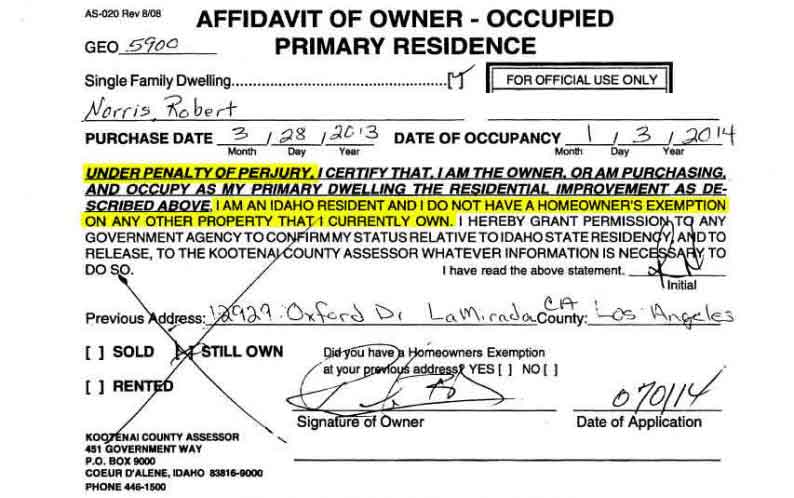 TL;DR –  The Kootenai County Deputy Sheriff’s Association (KCDSA) claims they interviewed every Sheriff’s candidate, they did not. They also claimed to have performed a “stringent background investigation”, they didn’t do that either. They significantly overestimated their ability to uncover the truth about Robert Norris.

On July 1, 2014, Bob Norris signed an affidavit of owner-occupied residency, claiming he was a resident of Kootenai County from January 3, 2014. This entitled him to a property tax exemption of $100,000 maximum per year, for the years 2015 through 2017, resulting in a property tax savings of approximately $4420.00. During the same time period, Norris maintained a homeowner’s exemption in California, voted in California, and as shown below, sought employment and spent considerable time in California.

The Kootenai County Deputy Sheriff Association or KCDSA defended Bob Norris as “the only candidate to pass their background process” in a paid advertisement in the CDA Press. The Idaho Report did an investigation and found several items the “three senior members” of KCDSA either missed or overlooked during their “7 am meeting when the snow was coming down heavy.“

Items in red are facts the KCDSA either omitted or was unaware of.

The preponderance of evidence suggests Norris was a resident of California up until around August of 2017. Does Norris’ repayment of California property taxes show intent to defraud Kootenai County?

Idaho Code 49-119 “Resident” means for purposes of vehicle registration, titling, a driver’s license, a person whose domicile has been within Idaho continuously for a period of at least ninety (90) days. A domicile shall not be a person’s workplace, vacation, or part-time residence.

1) Any act, event, or occurrence in the state that displays a presence in the state more than temporary.
2) A person who registers to vote. (exhibit 5)
3) An individual that finds gainful employment in the state. (exhibits7,17)
4) Dependents that attend a primary or secondary school. – Norris was granted primary physical responsibility for the care, custody, and control of the minor child. Norris’ child attended La Mirada High School in 2014 and should have graduated in 2017. (exhibit 1)
5) Are able to declare a homeowner’s property tax exemption. (https://portal.assessor.lacounty.gov/parceldetail/8038030020)

Votes in California while claiming residency in Idaho

When confronted with irrefutable truth,  Norris and his supporters usually resort to personal attacks rather than discussing the issues.

The Kootenai County Sheriff’s office has been sued many times in the past, most recently a 5 million dollar case was settled out of court (Soumas v Kootenai County).  These cases cost the taxpayers, and we should expect the county to be able to defend our pocketbooks.

If the county Sheriff was named in a lawsuit, but not able to testify because of a history of being untruthful on official documents, the county would likely have to offer a settlement rather than fight the case.

It is clear that Robert “Bob” Norris has lied.  Are the members of the Kootenai County Deputy Sheriff’s Association who performed this “investigation” incompetent?  Did they overlook publicly available information, or are they selectively ignoring facts?

The Idaho Report has learned that KCDSA President, Sgt. Jeremy Hyle was recently rotated into the detective bureau.  Hyle was scolded in 2018 by Judge Lansing Haynes for “intentionally and unconstitutionally detaining a suspect beyond the reason for the original traffic stop,” resulting in methamphetamine and paraphernalia charges being dismissed.

Let’s hope he gets some better training soon.

The public record list is long on this report, check back later for updates.

Follow TheIdahoReport.com for more facts as we pursue the truth.

Has anyone at the Sheriff’s Office heard of the Hatch Act?

Has Norris given the details of the shooting of a known mentally disturbed person?

The Idaho Report is an independent news journal bringing the facts after careful and dedicated research.